A brother and sister who claimed they were having sex in a sports bar bathroom were actually trying to steal a television, police said. A woman who had been using the bathroom at Samuel's Sports Bar in Springfield, Massachusetts, on Sunday night heard a man and woman tearing a TV off the wall while she was in a stall. 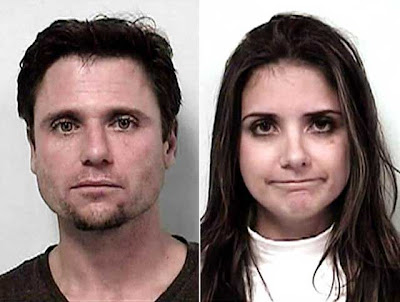 As they were "stashing" the TV, the woman fled the bathroom and told the manager what she'd witnessed, police said. The manager and another employee locked the suspects inside the women's room and called police around 9 pm 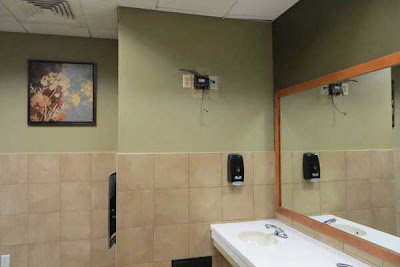 When police arrived, the man and woman inside the bathroom told police that they were simply having sex. Officers questioned them further and learned that they were brother and sister, according to a release from Springfield police. Police learned that a TV had been ripped from the men's room wall as well.

Robert Larrivee, 38, of 84 Nelson Ave., West Springfield, and Amanda Larrivee, 30, of 624 South East 19th Ave., West Springfield, are both charged with larceny over $250. Robert Larrivee was also charged with threat to commit a crime after threatening to beat up the arresting officer, police said. They were arraigned on Monday in Springfield District Court.
Posted by arbroath at 6:08 am
Email ThisBlogThis!Share to TwitterShare to Facebook

I read the headline and thought "A TV in the bathroom?"

Then I read the story and realized they actually meant toilet. Why call a room without a bath in it a bathroom?

I read the headline and thought "a TV in the bathroom?!" because that's just strange on its own..

ANYWAY you word it, bathroom, toilet, water closet, loo it's still odd to have a TV in that room. Why do you say toilet when there's more than one, and also urinals and sinks? This could go on all day.

It's a sports bar. Ever been to a sports bar? There are TV's on every inch of of wall space and some have them in the bathrooms too. Some people can't spend a second away from their precious ball games

When I take a sh!t I find a TV stimulates the bowels tremendously. Nothing quite like Trump's 'do for constipation and if you're finding yourself on the opposite side of the problem and find yourself p@ssing from your a%%hole then Discovery Channel always works. My hole puckers whenever I see monkeys.