Groundwork contractor digs up his own work over unpaid bill

An businessman who was left £12,000 out of pocket from an unpaid job has returned to a council-owned football pitch to dig up his work. Ron Downs, director of Unidig in Benfleet, Essex, said he was left with no choice after the company who hired him went into administration. He said he needed to reclaim materials from Waterside Farm Leisure Centre, Canvey Island, for another job. Castle Point Borough Council owns the leisure centre and hired construction group Morgan Sindall to oversee a £4m redevelopment.

A P Thompson was recruited as a sub-contractor and employed Unidig to help with refurbishments to an all-weather pitch. Mr Downs said he was asked in August to extend the perimeter of the pitch so it could accommodate goalposts when not in use. "We did the excavation work, dismantled the fencing around the outside, introduced new kerb stones and new tarmac - we were there for three weeks," he said. After being told by A P Thompson that it would not be able to pay for the work, Mr Downs said he contacted the council and Morgan Sindall to see if they could pay. 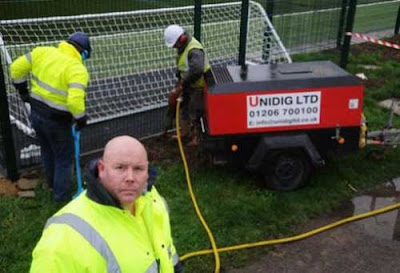 He said that when this looked unlikely, he decided to take matters into his own hands. Mr Downs returned to the site with his staff and started to dig up tarmac and 300 kerbs, each measuring 2ft 11in (90cm) in length, which they had installed. "All the materials and workmanship belongs to me," said Mr Downs. "I can't go to my supplier and ask him for any more kerbs because I haven't paid him. I need the materials at Waterside to go do a job I'm going to get paid for. I've got a mortgage, a wife and kids, I can't carry on like this."

A spokesman for Morgan Sindall said the company could not get involved with a dispute between Unidig and A P Thompson. "The contracts that A P Thompson Sports Engineering Limited entered into with its supply chain are wholly a matter for that business," the spokesperson said. "Its creditors therefore need to address their enquiries to the parties handling that business." A spokesperson for the council said it would not get involved with the issue as it had contracted Morgan Sindall to oversee the project.
Posted by arbroath at 6:01 am
Email ThisBlogThis!Share to TwitterShare to Facebook