A teenager's horseback riding lesson ended abruptly after a foot-long hunk of raw chicken that fell out of a cloudless sky hit her on the head. Fortunately, what hit Cassie Bernard last week was the smallest of three or more poultry parts that rained down as owner Jennifer Cording was giving a lesson to a group of advanced students at Queen Hive Farm in Assawoman, Virginia, "Three objects fell out of the sky in front of us, two larger and one quite small," Cording said.

Bernard, who was not injured, was wearing a riding helmet when the chicken hit her. Protecting a rider from unidentified flying chicken parts is not the helmet's normal function, but it did the trick. Officials from a nearby Tyson Foods Inc. processing plant denied that the flying chicken parts originated there. No matter what brand of chicken fell, a scientist later said high-flying seagulls probably were involved. A Virginia Department of Environmental Quality official said the agency will investigate. 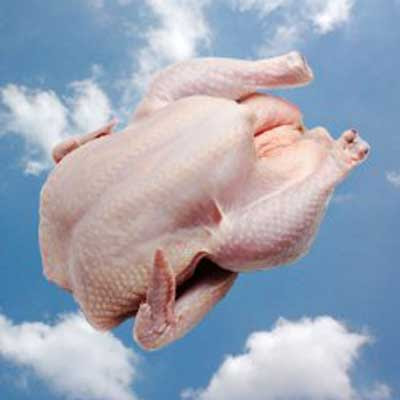 Land Protection Manager Milton Johnston of the department's Tidewater office said the parts more likely came from improperly composted dead chickens being spread on a nearby farm. "We can't have pieces of chicken falling out of the sky," Johnston said. Avian expert Bryan D. Watts, director of the Center for Conservation Biology at the College of William and Mary, said high-flying gulls likely are to blame. "I doubt it would be vultures because they don't typically carry things and they don't regurgitate in the air. It's more likely gulls, which we know carry chicken parts," he said.

Cording's farm is located between those marshes and a poultry-processing facility in Temperanceville, Va., about 3 miles to the west as the crow, or gull, flies. Watts said while the parts pose no threat, "the concern it brings up is the parts are supposed to be disposed of or covered. They are not supposed to be available to scavengers." Tyson Foods Inc. spokesman Worth Sparkman said the company doesn't know where the parts came from. Cording called an early end to the lesson after the bizarre incident. "It was one of those things around here that gives us something to talk about," said Cording, adding, "It was a weird night."
Posted by arbroath at 6:06 am
Email ThisBlogThis!Share to TwitterShare to Facebook

nice one my man