An Arlington, Texas, woman says that a new iPad she thought she had bought at a great price turned out to be a fake. Jalonta Freeman said she bought the item from a stranger who approached her at a gas station near Highway 360 and Green Oaks. "He pulled up beside us, and he was like, 'Hey, I've got some iPads and stuff, and I've got some laptops if you all are interested in buying,'" she said. 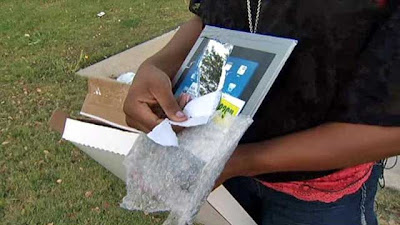 He offered to sell a brand-new iPad worth $800 for just $200, Freeman said. With Christmas coming up, she and her family thought it sounded too good to pass up. They gave him the cash, and he quickly drove off, she said. When Freeman's sister opened the package, it turned out to be a mirror about the size as the tablet. "If you turn it on the back, it actually looks like an Apple iPad," Freeman said.

"And when you turn it to the front, it has the prices and stuff. It even had an Apple logo stuck on it. That's so messed up," Freeman said. "That's so wrong. I would never do anybody like that. Get a job." Freeman said she became angry when she realized she had been conned. "I just started cussing," she said. "I was upset. Anybody would be upset if you found out you just got scammed, you know what I'm saying? You just lost $200."

Freeman reported the crime to Arlington police, but she never got a licence plate number and she admits that investigators have little to go on. She said she now feels stupid but has learned an important lesson. "Don't buy nothing on the streets from nobody," she said. Arlington police spokeswoman Tiara Richard said she had not heard of any similar incidents but added these kinds of crimes always increase in the weeks before Christmas.
Posted by arbroath at 6:06 am
Email ThisBlogThis!Share to TwitterShare to Facebook

And the rest of the world thinks Americans are dumb! I can't think why.

She gets a stranger, in a car park, saying he has a load of shiny new ipads and laptops, for a quarter of the retail price, i.e. at less than any retailer could buy them for, so the only assumption any sane person can make about the price and place of offer is "something's badly wrong".
Either they're not real, or they're red-hot stolen.
And she thinks she's a victim when she was stiffed on a purchase of stolen goods?

This woman's too stupid to work an ipad anyway. If the box had an etch-a-sketch in it she'd never have figured out she was scammed.

Says it all really.

This is the oldest scam in the book. There's even a well known saying that warns you off it, "never buy a pig in a poke".

A few years ago it was laptops being swapped for bottled water, now it's iPads beign swapped for picture frames. The trick usually works by the vendor showing somebody the genuine article and then either offering to bag it for them or get them one in a factory fresh sealed package.

It's common all over the world and is believed to be even more common than is reported because many people don't report the scam to the police.

"Don't buy nothing on the streets from nobody,"
...so much more than just a double negative.