It sounds like an unlikely conqueror of the Atlantic - only 4ft long, weighing just 30lbs and held together in parts by bathroom light cord. But this week a toy boat called Snoopy Sloop will attempt to become the first craft to make a fully autonomous sailing boat crossing of the ocean. Its creator Robin Lovelock, a retired Nato scientist, has spent four years developing a craft he believes can survive the 6,000 mile journey. The vessel has already demonstrated its endurance, having completed more than 5,000 miles during seven months of almost continuous sailing, albeit on the gentler waters of Bray Lake, just off the M4 motorway near Windsor. Now it faces a more testing voyage, battling the seas, and possibly storms, of the North Atlantic, despite being a fraction of the size of shipping which normally makes the winter crossing. 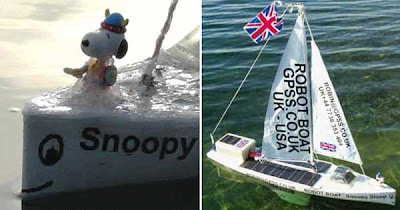 Mr Lovelock, 65, has assembled the vessel in the games room of his house in Sunninghill, Berkshire, from off-the-shelf parts scoured from the internet at a cost of less than £450. The boat will be powered by the wind, but navigated by a solar-powered computer and GPS system. These will control the rudder and – it is hoped – steer the boat on a preprogrammed route along the Channel, then south towards the Azores to catch the trade winds to the Bahamas and onwards to land near the spot where the Pilgrim Fathers came ashore at Plymouth, Massachusetts. A tracking device will emit a signal every hour to update Mr Lovelock back home about the boat’s progress – or otherwise. The 30lb vessel is expected to crawl along at around three miles an hour and – if all goes to plan – will not reach its destination for up to six months. Weather permitting, it will begin its Transatlantic journey from Barton-on-Sea, Hampshire, next Saturday, or subject to conditions, as early as tomorrow. 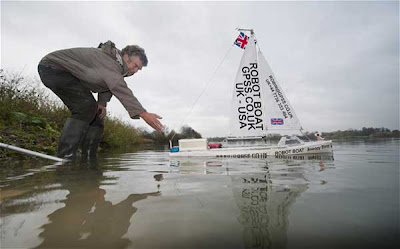 Autumn is not the most auspicious time to cross the Atlantic, in any sort of vessel, but there is no time to spare as the craft could face competition. The attempt is being made as part of an international contest, the Microtransat Challenge, to become the first to send an unmanned sailing boat from the south of Ireland to the Bahamas. Competitors can set off whenever they wish. So far, three attempts have been made since the transatlantic challenge began in 2010 – two by French academics and one by a team from the University of Aberystwyth – all of which have been defeated by a combination of technology failures and the weather. Three more are registered to attempt the crossing this year, two from France and one from Norway.  Mr Lovelock’s entry is rather more homespun than the hi-tech and better resourced craft which have so far failed the Transatlantic challenge but he is convinced it can succeed, after four years of development and seven prototypes - two of which sank.

The small figure of the cartoon character Snoopy on board was installed “as a wind up to academics who take it too seriously”. Mr Lovelock is relaxed about some of the hazards and concerned about others. “The chances of an encounter with another vessel are so small, and Snoopy should just be brushed out of the way,” he said. “Birds on Bray Lake do like to perch on the boat, but when the wind blows the sea gulls won’t like it, and any mess on the deck will be washed off. It may not have faced big waves yet, but its small size means it should just be able to ride the swell. There are certain things to worry about and others not to. The likely problems will be with reliability, and how the navigation system works with the tides.” Mr Lovelock has been assisted by a group of friends, he has described as his “Last of the Summer Wine” team, including a former veteran of the Robot Wars BBC television show.

You can read all about, and keep up to date on the progress of Snoopy Sloop here.
Posted by arbroath at 6:00 am
Email ThisBlogThis!Share to TwitterShare to Facebook