Catman comes to the rescue in Whitstable

A graffiti artist has taken on a mean-spirited vandal who daubed walls with claims Father Christmas doesn’t exist by painting a jolly Santa over the top. 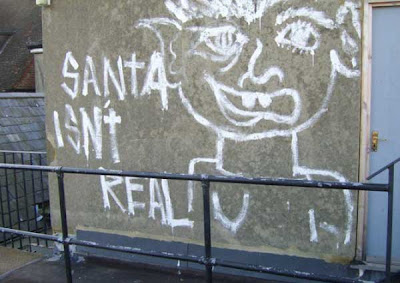 The grinch had scrawled the words ‘Santa isn’t real’ on a wall in the middle of Whitstable, Kent, making parents of young children furious. But a local graffiti artist known only as Catman went out in the dead of night to play his part in keeping the Christmas magic alive for youngsters in the town.

At some point last weekend, Santa made an appearance on the wall - paintbrush in hand - to dispel the myth he doesn’t exist. The Christmas cartoon has been welcomed by local councillors, who are usually harsh critics of all graffiti. 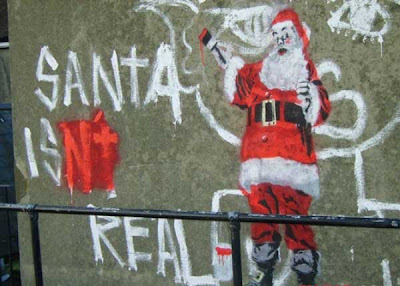 Cllr John Wratten said: “The original has been there for a long time so I guess it needed updating and it has been done tastefully, with typical Whitstable good humour. Santa is a lucky man – he has become better looking with age. I like it but I hope it doesn`t start an outbreak of graffiti, tasteful or otherwise.”
Posted by arbroath at 6:00 am
Email ThisBlogThis!Share to TwitterShare to Facebook