Wild moments overcame a tree-lighting ceremony in Charleston, South Carolina on  Saturday. It happened when a giraffe named Melman appeared unsettled and stressed-out in Marion Square. The animal was brought out moments before the annual Christmas tree lighting. It was supposed to be just another part of the city's holiday tradition. The intention was for the giraffe to introduce Santa as part of the tree-lighting skit. No one, nor the animal was hurt, but the production didn't go as planned. 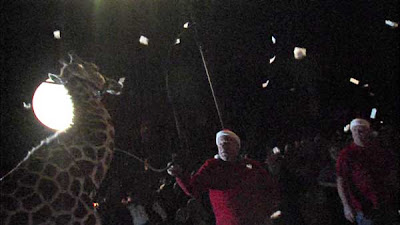 The giraffe's handlers led the animal along a path near the crowd, but in moments the giraffe appeared upset, it began to resist and started shaking its head and neck. "There were a number of people that crowded around and took a lot of pictures with flashes, that got the giraffe a little stirred up," said Ellen Moryl, Charleston's cultural affairs director. Moryl said the giraffe was brought to Charleston, along with two zebra's, from Eudora farms in Aiken County. "What we are is an interactive, educational animal exhibit," said giraffe owner, Mark Nisbet. "We have a unique variety of animals from antelopes to zebras to giraffes."

Moryl said the giraffe is specifically trained for public appearances and Nisbet says Melman is used to crowds. However, once it started to settle down, a confetti cannon seemed to scare the animal again. "They never had anything like that before, so we just assumed it would be similar to the way it was before because we were walking the same path the year before," said Nisbet. "The handler immediately knew he needed to take the giraffe back out of the crowd which he did," Moryl said. The 2-year-old giraffe was not hurt, and while it appeared to be close to the crowd, Moryl said parents and children in attendance enjoyed the surprise.

However, there were others who did not.  Alex said, "Why is a giraffe being used for a tree-lighting ceremony?! Don't get me wrong, I love giraffes, but really?!" Connie asked, "Whose brilliant idea was that? Awful! That poor animal, they had to pop the balloon over it and have the confetti fall to spook him even more? So wrong on so many levels." Organizers said Charleston has worked with the animal farm the giraffe came from, with great success in the past. "Last year we had camels there," said Nisbet. As for Melman, he is safe and sound, enjoying his spacious yard in Aiken County. "He was perfectly fine once he got close to the trailer. He was back to normal," said Nisbet.
Posted by arbroath at 6:05 am
Email ThisBlogThis!Share to TwitterShare to Facebook

But of course use a giraffe in the ceremony. Isn't it giraffe's that pull Santa's sleigh?