A drunk blind man who ran down his girlfriend when he drove after drinking five bottles of wine has been jailed. Scott Law, 33, who is registered blind, got behind the wheel of the family car after a drunken argument with his partner Suzanne Scawthon. He ignored the safety of a two year old child in the rear passenger seat and drove straight at Ms Scawthon knocking her to the ground as she walked away.

Ms Scawthon escaped with minor grazing following the incident near his home, in Gainsborough, Lincs. The couple then drove off but a passer-by who witnessed the incident took down the registration number of their Peugeot 206 and contacted police. Law was traced through his number plate and admitted to officers that he was registered blind and could not drive. 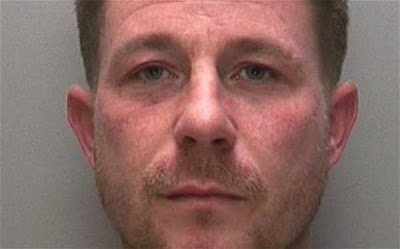 He was breath tested and found to be more than twice the legal limit with 88 mgs of alcohol per 100 mls of breath. The limit is 35 mgs. He was jailed for nine months at Lincoln Crown Court after admitting charges of dangerous driving, drink driving and driving without a licence and without insurance. He was also disqualified from driving for six years.

Passing sentence, Judge Sean Morris told him: "You were driving up the road unable to see properly because you were registered blind and you were full of drink. You are a menace when it comes to cars. It is time you learned your lesson. You can sit in prison and think about your life and what you have done." Sunil Khanna, defending, said that Law was trying to catch up with his partner after she walked off. His poor eyesight and drunken state meant he misjudged distances and ended up knocking her down.
Posted by arbroath at 6:00 am
Email ThisBlogThis!Share to TwitterShare to Facebook