Visitors arriving at the Wilhelmshoehe railway station at Kassel in Germany raised the alarm with police after finding two donkeys standing on the platform. 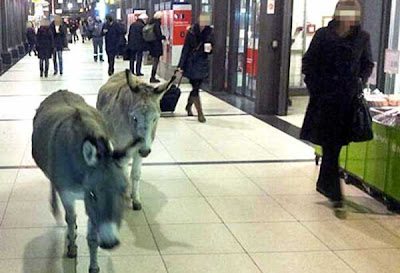 The pair named Benny and Maria had managed to find a way out of their stable on the outskirts of the city and had wandered undisturbed all the way into the centre where they then went through the automatic doors into the station.

A police spokesman said: "We were surprised they managed to get so far without somebody raising the alarm but we think a lot of people just assumed it was some sort of Nativity stunt. Any other time of the year we would have probably had a lot more calls – but as it was it was only when they ended up at the train station that passengers started calling realising it wasn't safe." 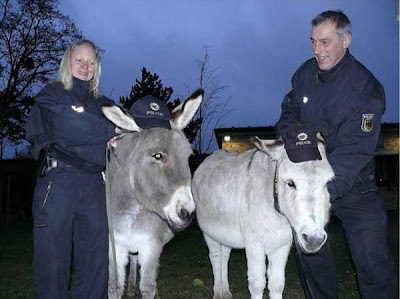 The donkeys refused to leave quietly and in the end police needed to use dog trainers Christina Scheffmann and Rudi Risch experienced in handling animals to catch the pair - and rope them up until the owner could be found. They were then returned safely after the owner arrived to collect them.
Posted by arbroath at 6:02 am
Email ThisBlogThis!Share to TwitterShare to Facebook