A London bar has been raided by police for allegedly serving cocktails flavoured with illegal whale skin. The Metropolitan police targeted the Nightjar bar in Hoxton, East London, where a drink called the Moby Dick was listed on the menu, described as containing whisky, Drambuie, ale and bitters, along with a "whale skin infusion".

There is a Europe-wide ban on the sale of whale meat and products, except under strict restrictions in Greenland and Denmark. Police were tipped-off in October that the bar was serving whale skin illegally, and raided the City Road premises on December 3. It was carried out by officers from the Met's Wildlife Crime Unit and an officer from the United Kingdom Border Force. 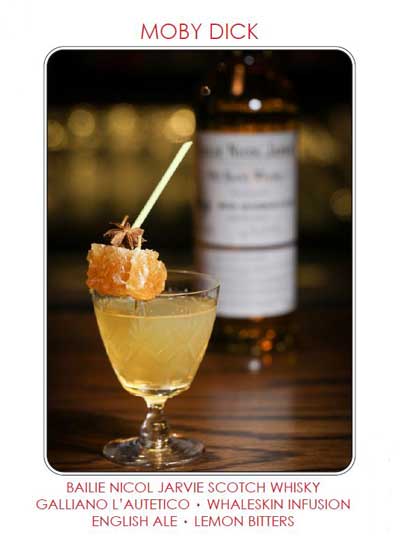 "One item from the premises was seized," said a police spokesman. "This has been sent for analysis." No arrests have been made. Nightjar director Edmund Weil said: "We did have a drink on this year’s menu which included a small amount of scotch whisky infused with a single 2 x 5cm strip of dried whale skin. The strip was purchased in a shop by an employee while on a trip to Japan in autumn 2011.

"Until the police visit, neither ourselves nor our employees were aware of the legislation under which the bottle was seized. In hindsight we realise that regardless of the legal framework around such products, it was an error of judgement on our part to include this on our menu, and we would like to offer our apologies to anyone who may have been offended by it.We have removed the drink entirely from our menu, which will be reprinted before Monday to reflect this."
Posted by arbroath at 6:00 am
Email ThisBlogThis!Share to TwitterShare to Facebook