A kindergarten is being investigated by a local education watchdog after its so-called "hug fee" caused a backlash from angry parents in east China's Yangzhou City.

Parents are asked to pay the fee so that their children at the Jiangdu District Shangmao Kindergarten will be hugged by teachers when they arrive in the morning and again when they leave. It is charging 80 yuan (£7.90, $12.80) per month per child. 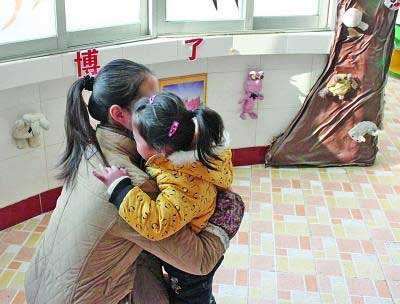 A netizen named Langmanhongchen posted online about the charge, saying a friend's daughter studies at the kindergarten and the friend learned that parents were charged every month for the hugs their children received from teachers. "Parents were told by teachers that hugging will put their children in a good mood."

The kindergarten explained that the service is part of a quality education trial to show that children feel loved and have their confidence raised when they receive hugs from teachers. But local education authorities said there were no grounds for the charge. Such a practice violates related rules and the kindergarten should return the money to parents, it said. A further investigation is under way.
Posted by arbroath at 6:04 am
Email ThisBlogThis!Share to TwitterShare to Facebook