Rescue workers save man and dog trapped on icy lake

A man and dog were rescued on Thursday afternoon from an icy area of Lake Erie near Brownstown Township. A man called 911 to say his dog had wandered onto the ice and another person attempted to rescue the dog but the two got stuck on the fragile ice. The dog is an 11-year-old Walker Coonhound named Bart. 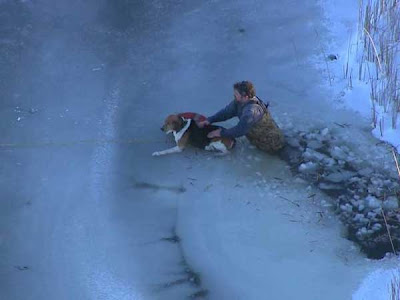 He is best friend to Jim Swayze. Swayze and Bart were out for an afternoon walk when Bart wandered away and fell through the ice. His two front paws kept him from sinking. "I tried to walk around to him and it was just too deep, and I couldn't get to him," said Swayze. He was waist-deep in the freezing water when he called 911. He called his cousin, Lance Eicher, too. Eicher arrived first.

With his waders on, Eicher stepped out onto the ice, taking a chance on every step. "I just wasn't thinking. I just wanted to try to rescue the friend of the family," he said. "It broke and I fell in, and I was probably about 3 and 1/2 feet deep." He finally reached Bart who had spent an hour and 1/2 in the frigid water. Eicher held the dog close before they were rescued. 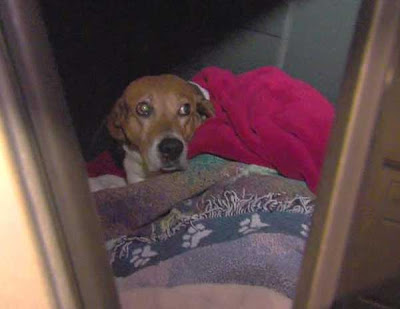 Rescue crews were able to take a boat out to the man and dog, safely returning them back to shore. "I was talking to (Bart), I was trying to keep him warm. I was trying to rub him and get some blood flowing through his body," Eicher said. Animal Control officials at the scene said the dog was cold, but didn't appear to be seriously hurt. "I kind of looked and said, what if this was my dog? What if I was in the same situation? I would hope somebody would try to do the same thing," Eicher said.