Santa has been offered police protection in Airdrie after he was attacked with bricks while carrying out his duties. The Round Table’s yearly Santa sleigh run in the Petersburn area of the North Lanarkshire town was disrupted on Sunday as an item, believed to be a brick, was thrown at Santa as he toured the streets. Santa Claus, alias 69-year-old Andy Stein, was left shaken by the incident, although no one was hurt.

He said: "I’m disgusted with it. That’s nine years I’ve been doing that run, I’m getting an old man now. For that to happen with the children of the street there, it’s diabolical. Now, I’m not the timorous type but I couldn’t settle down for an hour afterwards. But as they say, the show must go on." But Santa said he is determined to continue visiting housing estates across Airdrie and Coatbridge spreading Christmas cheer while raising funds for local projects. He said: "It certainly won’t put me off - absolutely no chance. I’m going to keep going as long as I can." 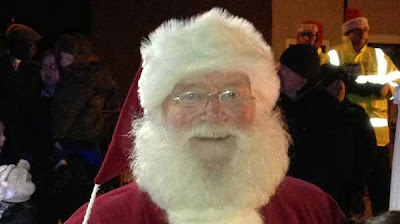 Gordon Millar, chairman of the Round Table in Airdrie, said: "Last year we were ambushed by around 20 or 30 youths in the Petersburn area, so we obviously had that in our minds. We had police accompanying us this year. When it happened there were parents out with their kids to see Santa and we had the police with us. You really wonder what goes on in the minds of some people, that could have hit Santa or any of those kids. Thankfully no one was hurt but Santa got a real fright.

"We think it was a brick or something like that, we just heard a really loud bang and then saw the police officers starting to run. You'll never see a better Santa, he starts growing his beard in August for this. We’ll never have a better Santa. It was really disheartening, and people from Petersburn are disgusted as well. We’ve been getting so much support from people from the area. It’s a minority that ruin it for everyone." A spokeswoman from Strathclyde police, said: "At 4.50pm on Sunday, December 16, an object was thrown at Santa on his sleigh at Oronsay Road in Airdrie. "Police are following a positive line of enquiry. Extra attention was given because of the incident."
Posted by arbroath at 6:00 am
Email ThisBlogThis!Share to TwitterShare to Facebook