A distraught French family were forced to hold their mother's funeral ceremony without her when undertakers failed to deliver her body in time for the service. The family of Maria-Louise Malca are now suing the funeral director in the south west town of Bayonne.

It was the dying wish of the elderly woman to be buried next to her husband in Villenave d'Ornon, near Bordeaux, a request that necessitated a final 200km journey from the care home where she died. 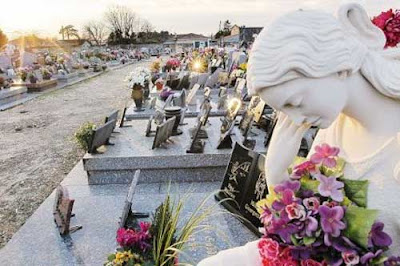 On the morning of January 11th, the Olhagaray family gathered for her funeral, but when Maria-Louise's body did not show up, they had no choice but to hold the ceremony without her. When the undertaker finally arrived at Villenave d'Ornon later in the day, many family members had already returned to work.

The Olhagaray family have now hired a lawyer to sue the undertaker for 'moral damages'. It is not known what caused the funeral home's late show, but when contacted, the funeral director acknowledged a "mistake" had been made, but defended the home's actions, claiming that in the course of countless funerals, events like this one were very rare.
Posted by arbroath at 6:05 am
Email ThisBlogThis!Share to TwitterShare to Facebook