A giant goldfish was caught in Lake St. Clair, between the Province of Ontario and the State of Michigan, last Friday. Mike Martin loves to fish. He has been fishing for 20 years. "First one I've ever caught and I fish it religiously," said Martin. 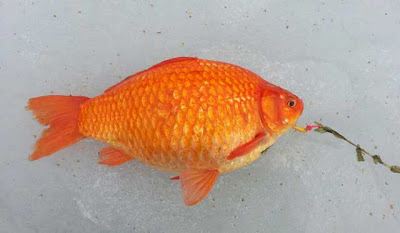 "We see them all the time but, to actually catch them is rare," he said. "Everybody wants to just dump them off their seawall and let them be free and this is what they turn into." 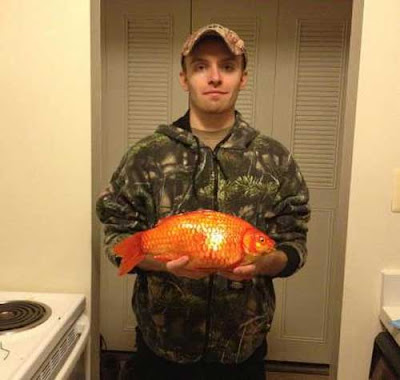 The fish was over 3 pounds and nearly 15 inches long. Martin caught it while ice fishing for perch. He says he thought it was just a big perch on the line before he saw what it really was. "Definitely not a perch," he said.

Martin says he called his father after the catch "I didn't know what to do with it, what do you do with a goldfish?" His father told him to put it in a bucket and take it home. "This will probably be the only one I ever catch so he's going to go on the wall," said Martin.
Posted by arbroath at 6:03 am
Email ThisBlogThis!Share to TwitterShare to Facebook

Why couldn't you just take photos and let it live ?

you ever catch a 3 pound goldfish?

I'm (almost) with Kris. Though I consider catch and release to be just mutilating defenseless animals. I'm all for fishing and am happy to eat what I catch but he obviously wasn't going to eat it so once the mistake was realised, leave the poor bugger alone.