A cat who was found wandering in Matlock, Derbyshire, has been reunited with his owners 200 miles away after displaying his special talent of giving high fives. Oliver is believed to have climbed aboard a removal van, which then travelled 200 miles from Sussex to Derby in December.

His desperate owners from Shoreham had searched high and low to find him, putting up posters in their village, contacting their local paper, and eventually searching websites of rescue centres up and down the country. It was while looking at a website for the RSPCA Derby and District Branch that his owners spotted their 11-year-old ginger tom cat staring back at them from a photo. 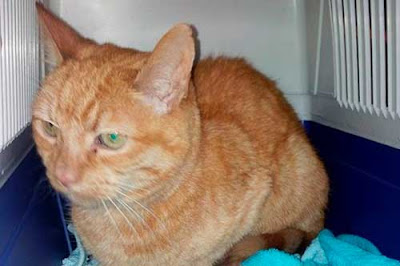 Oliver, who had been taken to the Derby branch care after he was spotted in Matlock, was thin. But he was not microchipped, so he was put up for adoption. Malcolm Hall, customer care manager at the Derby branch, said: "To confirm it was definitely him, the owners had an unusual thing to recognise him by, for Oliver gives high fives.

"Once it was explained by the owner that the cat was called Oliver and would give high fives, the centre's supervisor called him and he perked up, gave her a high five and there was no doubt it was him. Oliver returned home to Sussex last week and was reunited with his family, complete with a new microchip."
Posted by arbroath at 6:00 am
Email ThisBlogThis!Share to TwitterShare to Facebook