Message in a bottle made 9,000 mile trip from Sunderland to Australia

A nine-year-old schoolboy's message in a bottle travelled from Sunderland in the north east of England, to Western Australia in a nine thousand mile journey taking more than 16 months. 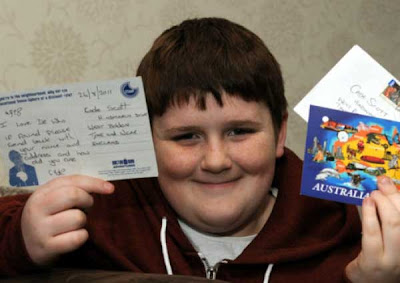 Cade Scott, from West Boldon, Tyne and Wear, wrote a short message on a Dr Who postcard and let it loose at Roker Harbour on August 26, 2011. 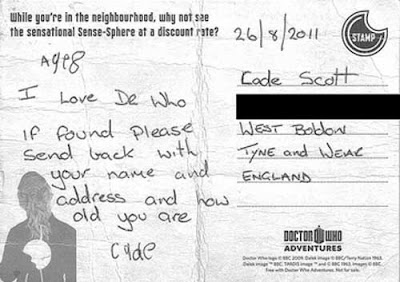 Cade’s bottle was found at Christmas on the beach in Perth, Australia. The Dr Who postcard was sent back to him on January 7, 2013 with another postcard, reaching Cade on Saturday, January 12. 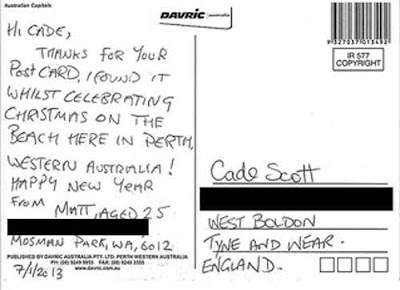 Matthew Elam, 25, who found the bottle wrote back: “Thanks for your postcard. I found it whilst celebrating Christmas on the beach here in Perth, Western Australia! Happy New Year.” Cade now plans to reply to Matthew using a traditional envelope and stamp.
Posted by arbroath at 6:03 am
Email ThisBlogThis!Share to TwitterShare to Facebook

And what have we learned? That the prevailing currents still carry all the trash from England to Australia...