Two police officers who tried to rescue a feisty feline from a busy road in Melbourne, Australia, on Wednesday morning, were badly bitten and scratched by the "savage" cat. 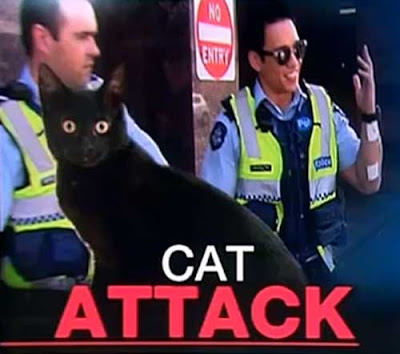 The pair, from St Kilda Road police station, had to be taken to the Epworth Hospital for treatment. The officers blocked one lane of the West Gate Freeway on-ramp at Kings Way after being called about the cat at about 6.50 am.

With the help of CityLink staff, the feline was captured and put in a cardboard box. Unlike its rescuers, it was unharmed and will be taken to an animal shelter, a police spokeswoman said.

"It's just a very savage and very frightened cat," she said. The spokeswoman said the officers received puncture wounds to their hands, wrists and fingers.
Posted by arbroath at 6:04 am
Email ThisBlogThis!Share to TwitterShare to Facebook