A blind dog in Wales who hardly ever left his basket because he would bump into things now has a new lease on life thanks to a helpful stray cat. 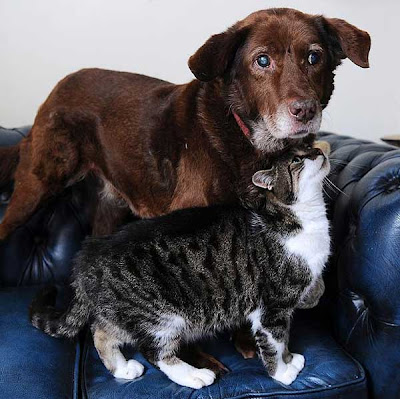 Because of cataracts, eight year-old pup Terfel can only see patches of light and darkness. But as soon as its owner adopted Pwditat, things changed.

On their first meeting the cat walked up to Terfel in its basket and led him out into the garden. Pwditat has continued to lead its vision-impaired friend around the home since.

"Pwditat immediately seemed to know that Terfel is blind," Anne Cragg, who cares for the pair now that their owner isn't able to, said. "She uses her paws to help guide him. They are glued to each other and even sleep together now."
Posted by arbroath at 6:01 am
Email ThisBlogThis!Share to TwitterShare to Facebook

Why don't they just get the dog's cataracts removed?

Cheaper to get a stray cat....