When the Crown Prosecution Service demanded a witness statement in the name of a police force dog, officers realised that it would be taking their canine skills a step too far. They wrote back explaining that PC Peach was in fact PD Peach, stressing that PD stood for police dog but to no avail. Eventually, the exasperated handler completed a form as if it had been written by the Alsatian, signing it with a paw print.

The statement read: “I chase him. I bite him. Bad man. He tasty. Good boy. Good boy Peach.” It stated that the age of the witness was “four” and that his number was PD4341. The document was pinned to the wall at West Midlands Police Station, much to the amusement of colleagues. One officer took a photograph of the statement and it soon appeared on Facebook and on several police Twitter accounts. 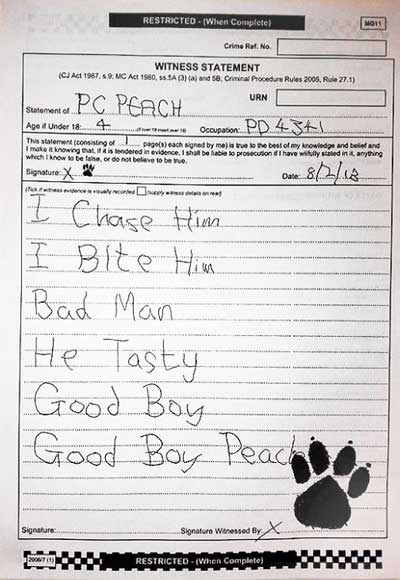 The CPS, however, failed to see the funny side and complained to the police that their mistake had been turned into a very public joke. PC Mark Tissington, of West Midlands Police, who is believed to have shared the original picture of the witness form, has referred himself to the internal discipline unit although sources suggested he was unlikely to be reprimanded.

Ian Edwards, chairman of the West Midlands branch of the Police Federation, said: “It's a difficult time for police and sometimes humour is a way of venting frustrations. I would urge our Professional Standards Department to be even-handed in the way they deal with it.”  The CPS declined to comment.
Posted by arbroath at 4:00 am
Email ThisBlogThis!Share to TwitterShare to Facebook

Perhaps the Can't Prosecute Service should get a sense of humour, and maybe they could actually do some prosecuting at somepoint.