Disabled turtle gets new lease of life with prosthetic flippers

A loggerhead turtle thought to have had her front limbs partly severed in a shark attack has been given a new pair of artificial flippers. Yu, aged about 25, has been through 26 pairs of rubber limbs already - but all have proved too painful to keep. The new ones are attached to a vest slipped over her head, said Naoki Kamezaki, curator at an aquarium near Kobe in western Japan, where Yu lives. 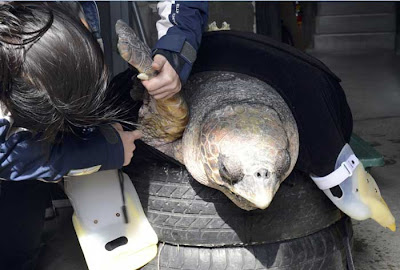 "We have worked hard to design the vest in a way that prevents the turtle from taking it off unwittingly," he said. Yu, who weighs 96kg (212lbs) and has a shell 82cm (32ins) long, was pulled out of a fisherman's net and sent to the Suma Aqualife Park in mid-2008. 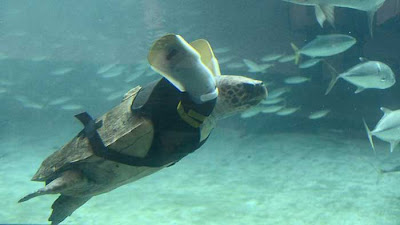 One third of her right limb and half of the left limb were gone following what Mr Kamezaki believes must have been a shark attack. The aquarium started developing artificial limbs for Yu in late 2008 as she could swim only at about 60% of normal speed. Earlier versions caused her difficulty because they were squeezed into the stumps.

"Similar attempts have been made to attach artificial limbs to turtles around the world, but we have not heard if they went well," said Mr Kamezaki, an expert on sea turtles, whose surname coincidentally means "turtle cape" in Japanese. "Ours may be the only case in which a turtle with artificial limbs is still swimming without a problem."
Posted by arbroath at 6:04 am
Email ThisBlogThis!Share to TwitterShare to Facebook