Mother claims dog that bit her daughter is racist

The mother of a seven-year-old South African girl who was bitten on the knee by a bull terrier believes the "dog is racist". Pam Nkosi of Honeydew, north of Johannesburg, says her daughter was playing with other children when the dog ran into their yard and bit her daughter.

"I feel that the dog is racist. The way it behaved. It shows that it was not familiar with other races." Nkosi said the dog's owner, Sean Norman, had not come to see the child nor contributed to her medical bills. "I contacted emergency services who attended to the child before taking her to a doctor. 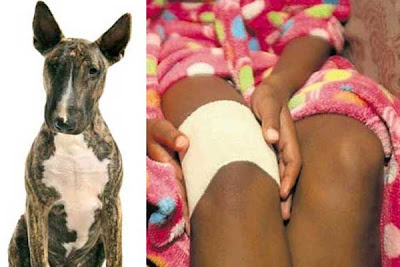 "A nurse living in our complex suggested that we get the dog's vaccination record," she said. "Since the owner was impossible, we had to get the police to intervene. We discovered that the dog's owner had defaulted on vaccinations and this puts my child at risk."

SPCA inspector Tarryn Smith did not want to comment on whether the dog was "racist" or not but said all domestic animals behave differently because of their upbringing. Smith further explained that they had suggested to the owner that he move the dog because the wall surrounding the property was low.
Posted by arbroath at 6:06 am
Email ThisBlogThis!Share to TwitterShare to Facebook

I got attacked by a guard dog in Kenya two weeks ago and the handler told me that it was because I was white. Thankfully he only managed to tear my shirt up.

The dog I had years ago would go crazy trying to bite brown skinned people, yet would wag his tail and lick Europeans. I raised him from day one and am no racist. No idea why he was like that, his mother wasn't.