A pensioner has been handed an ASBO after being caught with prostitutes three times in one night. Derek Edwards, 69, was banned from four red light zones after being repeatedly picked up by police with known prostitutes. Edwards, from Wootton Basset, Wiltshire, but originally from Wales, was caught during a trip to Bristol on January 8.

Bristol Magistrates’ Court heard that Edwards paid a total of £65 to three different prostitutes, and was initially caught red-handed lying on his back in a park with one performing a sex act upon him. After being given a stern telling-off by officers, he was released only to be caught just ninety minutes later paying another prostitute. 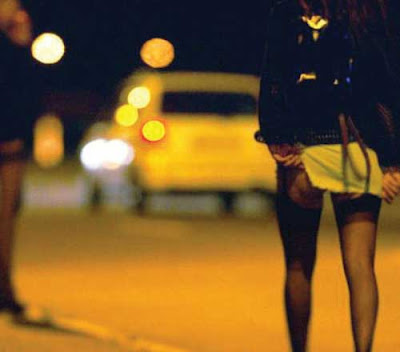 Following his second talking-to from police, he was spotted on CCTV at a train station with yet another prostitute, who he later admitted performed a sex act on him in the public toilets. Prosecuting, Jeremy Oliver said: “I don’t think I have ever seen such a degree of persistence in my time.”

Edwards’ solicitor told magistrates he had not come to Bristol specifically to meet sex workers, but he had been drinking before the incidents. He added: “I can say on his behalf, that he is not by any means proud.” Presiding magistrate Rosemary Kirwan fined Edwards £50, and ordered him to pay £105 in costs after he admitted three charges of soliciting a prostitute for sexual services in a public place.
Posted by arbroath at 6:00 am
Email ThisBlogThis!Share to TwitterShare to Facebook

What is a "red light zones" and how is it decided which area is labeled that?

Good question Dunex...I just had to go and find out!
http://en.wikipedia.org/wiki/Red-light_district
Is where you'll find out some possible origins of the term.

I personally love the story of early railroad workers sneaking off with their red lanterns so that their crew could find them in the event of an emergency!