A woman in Australia's Northern Territory is scratching her head over who shaved her pussy. Her five-year-old grey moggie, Chloe, tottered home after a big Friday night out in Palmerston but it wasn't until the next day that her owner Yvonne Birch noticed she had a strange pattern carved into her side. 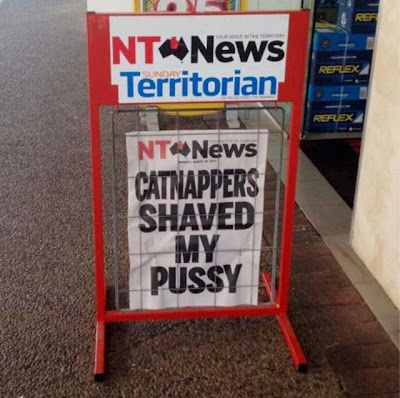 "She's been shaved," she said. The 25-year-old airport worker from Gunn said Chloe was friendly, but "not the kind of cat to lay down and take it". "Whoever's done it will have scratches all over them and be missing chunks of skin," she said.

"She's the type of cat that freaks out when someone tries to restrain her." Ms Birch said long strips of fur had been sliced from her thigh to her belly, on her stomach and on her tail. 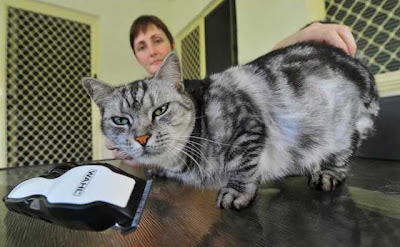 Even Chloe's yard mate, Connie the boxer-great dane cross, was surprised at her new look and sniffed her all over, Ms Birch said. She said Chloe was not feral and never strayed far from the house. "It must have been someone within a few streets," she said.
Posted by arbroath at 6:03 am
Email ThisBlogThis!Share to TwitterShare to Facebook

A shaved pussy is always better.

It was that Thai sausage maker from 2 posts up. He doesn't like getting hair in his mouth when he eats.

OMG. The jokes just write themselves! ;)