A man who fell asleep face down in his food on Friday night at a Putnam County restaurant got a rude awakening when police tapped on his shoulder. 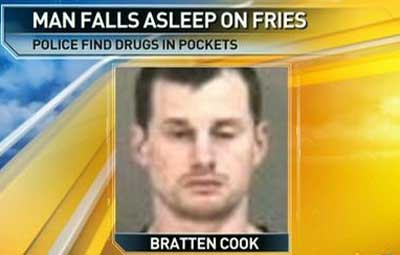 Restaurant staff at Hardee's in Cookeville, Tennessee, called police after Bratten Hale Cook III, 32, fell asleep with his face planted in a plate of French fries and ketchup.

Workers said Cook been passed out for about an hour. Police said when they woke up Cook, he was so drunk he started eating his fries and didn't acknowledge the officers.

Officers took Cook outside the restaurant and charged him with public intoxication. Cook received even more charges after police searched him and found marijuana and prescription pills in his pockets. Cook was taken to Putnam County Jail. His court date is set for April 5.

Someone actually named their kid "Bratten"? That wasn't destined to end well.