A Suffolk primary school with 25 pupils has received 400 emails in protest against its scheme to rear three pigs. Peasenhall Primary School is teaching the "provenance of food" by having children look after the animals before they are sent for slaughter. A spokesperson for the school said some of the emails were "foul and abusive". Protesters Colchester Animal Defenders said "slaughtering any animal for food" was "not necessary".

Liza Moore, head of Colchester Animal Defenders, encouraged people to call the school to voice their concerns but distanced herself from any abusive comments. She criticised the school: "They are desensitising the children and teaching them that pigs are lesser beings than us, and that is not right. All beings are equal, that is how we feel as vegans. We don't think schools should push meat as a healthy food option, especially in light of the horsemeat issue." 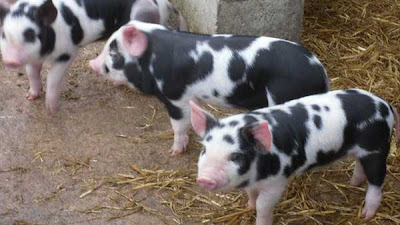 An online petition calling for the school to reconsider raising and killing the piglets claims to have more than 4,600 signatures. The pig scheme was devised by Cook With Me Kids, which is based in Suffolk and aims to "teach children (and adults) the importance of real food". Director Emma Haines said the criticism was "unfortunate" and admitted that some people might find the idea "shocking and extreme". "We have to accept the fact that our children are eating meat and all we're saying is we can show people how they should be rearing meat. What you're teaching them is compassion."

Ms Haines said she was not promoting meat eating and expected some of the children to find they were not "comfortable" eating meat as a result of the scheme. "I fully support that," she said. "They will understand the slaughter process, the butchery process, the storage, everything - we are not hiding this." The school said that it had "100%" support from the pupils' parents. Suffolk Police said it had spoken with Colchester Animal Defenders and was offering reassurance to the school.
Posted by arbroath at 5:58 am
Email ThisBlogThis!Share to TwitterShare to Facebook

Eating animals may not be necessary (although I'd dispute that) but it's damn tasty. Is anyone surprised that the cowardly animal "rights" terrorists would target children?

I'd hardly call it desensitizing.. In fact, quite the reverse. When you get your little hermetically sealed chunks of NZ lamb in a virtually sterile plastic tray, normally there's not even a picture of a sheep on it. If you make the connection that this was once a living breathing animal that liked having its ears scratched, you'd probably make damned sure you ate all of it; instead of thinking you'd like a pizza tonight then letting the meat go off and dumping it.

I'm not saying it wouldn't be traumatic, but I think it also has the potential for good.

Pigs are fed copper and sub-theraputic levels of antibiotics as growth stimulants, causing antibiotic resistant bacteria such as MRSA to proliferate.
There are many communicable diseases common to humans and pigs, which is why food pigs are kept in 'high hygiene' slatted-floor pens before being slaughtered at a young age.
They have their tusks and tails cut off with pincers without anasthetic as out of boredom they can fight or bite each other's tails off causing infection.
Pigs are affectionate and have good memories, and have an intelligence around that of a dog.
Eating two sausages and a rasher of bacon a day will imcrease your chance of cancer by 11% and heart disease by 70%
Growing meat uses 100x the land the same amount of plant protien does.
It also uses huge amounts of water and produces huge amounts of CO2 in comparison to plants.
If you have no idea whether it's beef, pork, lamb or horse in your mince or burger, then what's the point?
Vegetarian alternatives taste just as good and are far better for you. Try it!

I'm pretty sure I would become a vegetarian pretty quickly if I had to raise and slaughter animals in order to eat meat.

Enjoy the best of both worlds by eating BOTH meat & veggies ;-)

"All beings are equal", but apparently horses are more equal than pigs? Surely a vegan would feel the same about eating any type of meat, so horsemeat is the same as pork as beef as lamb etc.