A neglected parrot which was nursed back to health wearing hand-knitted jumpers now refuses to be without them. Charlie, a green eclectus parrot, was rescued by Safehaven, a bird charity with a base in Nottinghamshire. The parrot had plucked out most of its feathers was was said to resemble an oven-ready chicken.

A vet said it should be put down but Rebecca Blagg, the charity's coordinator, knitted jumpers to keep it warm. Mrs Blagg said: "He has a green one, a blue one and a couple of peach-and-brown ones which we change once a week. We make them with very big wing holes so they don't restrict his movements. 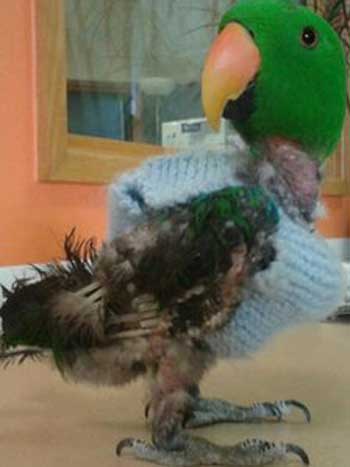 "If we take them off him for good, he gets very cross. He stomps about, he shouts, he gets very agitated. So we just stopped trying." The charity rescued Charlie in 2007. Mrs Blagg, from Eastwood, Nottinghamshire, said: "He was seriously underweight. I gave the order for him to be removed immediately and contacted the RSPCA.

"He was so weak, he couldn't stand on his perch and he used to fall off. He was the worst we'd ever seen. He was literally like an oven-ready chicken, he was that bald." Mrs Blagg took the bird home and fed it off a spoon. She said: "He was so cold without his feathers, he was shivering. I had to do something. Knitting's not my forte and I've never knitted for a parrot before. But he seemed to like it."
Posted by arbroath at 6:00 am
Email ThisBlogThis!Share to TwitterShare to Facebook

I wish they put up a picture of him now.

I did have a search around for an up-to-date photo, but unfortunately couldn't find one.

is there a pattern?