Hamster rose from the grave after Easter burial

A family from Painswick, Gloucestershire, have been left reeling after experiencing their very own Easter resurrection. Twenty-four-year-old James Davis thought Tink the hamster had enjoyed her last supper when he discovered the pet’s cold and lifeless body in the bottom of her cage. “I came home from work and found her lying in the middle of the cage,” said James. “I thought she was dead because she’s two-and-a-half years old, which is quite old for a hamster." James’s girlfriend, 23-year-old Lisa Kilbourne-Smith, said: “She was cold and lifeless. So we wrapped her up in a load of kitchen towel and buried her about a foot deep in the back garden so that the cat couldn’t dig her back up again.” 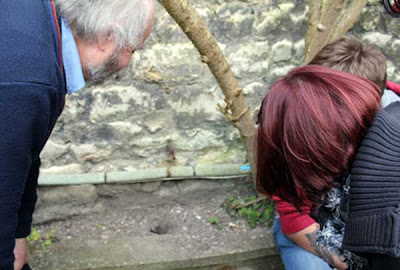 The couple, who were looking after Tink for a friend, then had the onerous task of calling the hamster’s owner to relay the sad news that her beloved pet had passed away. “We were looking after her for our friend Nicky while she moved house,” said Lisa. “So it was pretty awful having to ring her to tell her that Tink had died.” The following afternoon, Lisa’s dad, Les, was crushing down boxes in the back garden for recycling when he had the shock of his life. “I was taking the boxes out to the shed to squash them all down for recycling when suddenly a little face popped out of one of them, which gave me a big startle I can assure you,” he said. 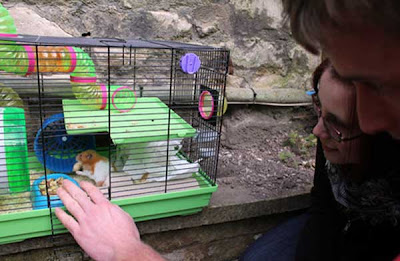 “I was about to squash it for the recycling so it was lucky that she popped out when she did. So I brought the box into the house and said to Jim, ‘Have you lost one of your pets?’ That was when we discovered that this was Tink, and that she most definitely wasn’t dead.” Sixty-year-old Les continued: “It’s amazing that she survived really. She had been out in that freezing cold all night – it was a good 24 hours. The energy she had to dig herself out of that hole, then get along the wall and climb up into that recycling box was remarkable really.” Ironically, the robust little rodent, who had in fact been hibernating, managed to survive the coldest Easter on record by seeking refuge in an empty Go Cat carton, which was in Les’s green bin for recycling.

Les continued: “It was so cold on Good Friday. I think the warming effect of the cardboard helped to keep her alive. It’s a good thing really that it was dry.” Bin man James, who works for Stroud District Council, said: “I’ve found all sorts of strange things in people’s recycling bins on my rounds, but never a hamster. When Les found her safe and well in the recycling, I had the embarrassing job of ringing Tink’s owner back to tell her, ‘She’s not dead, she crawled out of her grave last night.’” Happily, miracle hamster Tink – who the family have now laughingly dubbed ‘Jesus’ following her Easter resurrection – did wake up, and seems none the worse for her little adventure.
Posted by arbroath at 6:00 am
Email ThisBlogThis!Share to TwitterShare to Facebook