Scrapped Olympic arts project which has cost more than £500,000 'not a waste of money'

Plans for a giant steam artwork on the Liverpool skyline have been abandoned after 15 months of failed attempts to make it materialise. Artist Anthony McCall designed Column, a spiral of steam that should have risen 10km (six miles) into the sky. 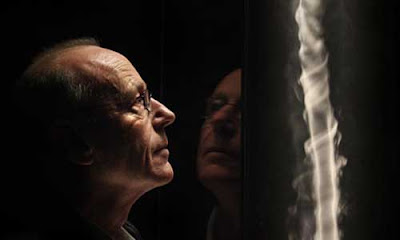 Arts Council England has spent £535,000 of Lottery money on the project, which was due to have run throughout 2012 as part of the Cultural Olympiad. Column was originally due to launch on 31 December 2011 and run for exactly 12 months. The steam spiral should have risen from East Float dock in Birkenhead and been visible for at least 100km (62 miles) on a clear day, becoming a "nationally and internationally recognised landmark", according to the organisers' original proposals.

But it was repeatedly delayed. The Civil Aviation Authority was worried that it would interfere with aircraft and the Port Health Authority had concerns that it could cause Legionella. Even after those fears were allayed, the steam-generating mechanism did not work properly and the column still did not appear. The budget for McCall's project was originally £500,000, including a £40,000 fee for the artist. The budget subsequently rose by £35,410. None of the money will be recouped.

Councillor Jim Crabtree, who represents Bidston and St James on Wirral Borough Council, said it was "a complete and utter waste of public money". "They should have done their homework before committing £500,000, especially given what we've got going on today - people starving, we've got food banks all over the place. How many people could you feed with £500,000?" The Arts Council have rejected accusations that it was a waste of money.
Posted by arbroath at 6:02 am
Email ThisBlogThis!Share to TwitterShare to Facebook