A woman from Broken Hill in far west New South Wales, Australia, has been found guilty of assaulting a police officer with a quiche.

Police told the Local Court they approached Franklin Jane Bugmy, 41, in the main street of Broken Hill on August 7 to give her an apprehended violence order. It turned out to be the wrong paperwork. Police say that is when Bugmy rammed Constable James Wheatley with a pram and threw the quiche at him. 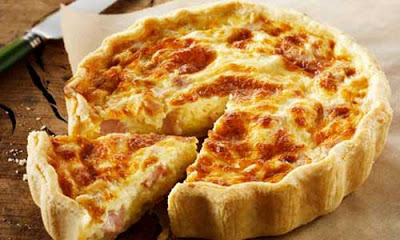 Outside the court, Bugmy professed her innocence. "They're saying I had room to move," she said. "I had no room to move. The quiche was thrown down to save my baby from tipping out of the pram." She will be sentenced in three weeks.
Posted by arbroath at 6:05 am
Email ThisBlogThis!Share to TwitterShare to Facebook

I haven't made a good old hamburger quiche in quite some time. Thanks for the dinner idea for this weekend!

Didn't know you could even get a quiche in Broken Hill... at best it'd be a bacon and egg pie!