A large animal carcass that washed up on a Bay of Plenty beach left some locals wondering if they'd come across the remains of a prehistoric animal. The carcass was discovered by a group of quad bikers on a beach about 5km east of Pukehina Beach. 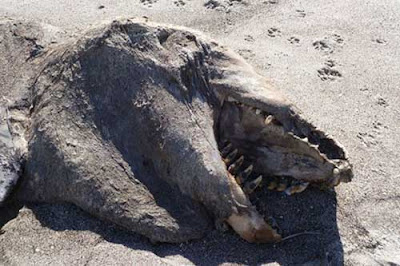 The animal's jaw and teeth and parts of its body were still intact. "People have been asking about it all weekend. It's caused a bit of 'What is it?' in the beach," says Luana Lovell-Dewes, one of the quad bikers who found the remains. 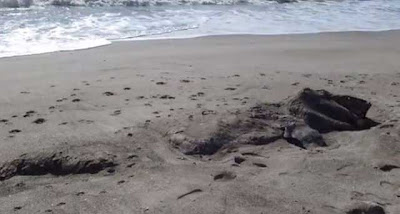 "We haven't seen teeth like that on an animal that's washed up." The photos were forwarded to marine mammal expert Anton van Helden, who said the carcass was that of an orca. He was able to identify it because orcas have a distinctive 'flipper'. "It's hard to say how it died," he says.

While Mrs Lovell-Dewes is glad to have the mystery solved, she is also a little disappointed. "That's boring isn't it? It's not the prehistoric animal I thought!" She says plenty of locals and visitors had been to see the remains, which have now been washed to sea.
Posted by arbroath at 6:06 am
Email ThisBlogThis!Share to TwitterShare to Facebook