A dog found lost and hurt in South Carolina was discovered to be caring for a tiny, nursing kitten. When Anderson Animal Control Officer Michelle Smith climbed down a steep embankment in Anderson to rescue a yelping dog, she saw a black-and-white Shih Tzu- mix curled in a tangle of bushes and briars. But when she blinked and looked again, she spotted a tiny kitten nestled next to the dog, suckling milk from her. 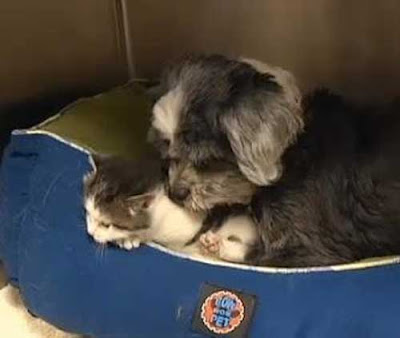 "I didn’t know what to think," she said. "I was shocked and surprised and then of course, awww." The dog and kitten received the same reaction when Smith took them to the animal shelter. Volunteers marvelled at the way the dog, which is at least 5 years old, looks out for the 5-week-old kitten. Jessica Cwynar, director of the shelter, says such behaviour is natural for mammals. 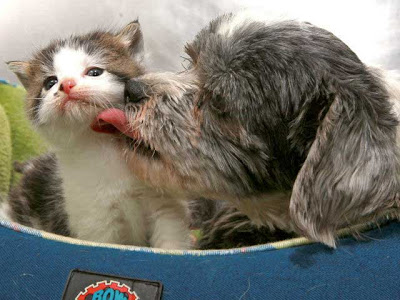 "It would be like one of us seeing a neglected or abandoned child and taking it under our wing," she said. Cwynar said the dog likely experienced a surge of hormones that induced milk production. "She’s producing some, but not all that (the kitten) will need nutrition-wise," Cwynar said. Volunteers are feeding the kitten tiny bottles of milk, a meal her canine mother likes as well.

The dog’s striped collar and clean fur means that someone is likely missing her. "She is someone’s pet because she has been groomed and has been well taken care of," Cwynar said. There is already a long line of would-be foster and adoption candidates for the pair, but Cwynar hopes that the dog’s owner comes forward and is willing to adopt a kitten. If that happens, the animal shelter will verify the dog’s ownership through veterinary or grooming records.
Posted by arbroath at 6:04 am
Email ThisBlogThis!Share to TwitterShare to Facebook