The world's smallest theatre, with room for an audience of just two, is to stage a version of King Kong.

The Grand Theatre of Lemmings is based in the sidecar of a Royal Enfield motorbike. 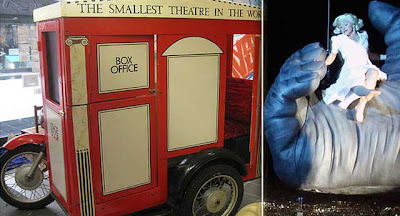 The theatre will bring its version of King Kong, which tells the story of a colossal gorilla, to Clacton in Essex on Wednesday. Alan Goggin, of Tendring District Council, urged those interested to arrive early to get a front row seat.

Although it can only accommodate two people inside, the theatre can open out for a larger audience. The Grand Theatre of Lemmings has been going for 29 years and has laid on shows as far afield as Japan and India.
Posted by arbroath at 6:00 am
Email ThisBlogThis!Share to TwitterShare to Facebook

I saw this at Glastonbury festival probably 1984, so they must have just formed then, sure ive got a photo somewhere

They've definitely been around since the early 80's, as this video with a young Henry Kelly and pre-drunk Sarah Kennedy attests.

Did you get to sit inside?

pre drunk lol
No I didnt go inside and i cant even remember what it was they were doing.
Happy days :)

Where did it all go wrong?

we got older and broker ;)