Nearly 30 firefighters responded to a condo fire in Boulder, Colorado, just after 3pm on Monday. No one was home, so there were no injuries.

Three pets were rescued and returned to relieved owners. What started as a deck fire, spread to the roof and caused extensive damage from smoke, fire and water. 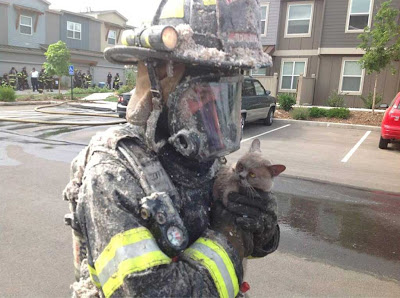 The still undetermined cause is being investigated by fire investigators. After three successful animal rescues, all pets accounted for and safe.

One cat was found in a master bedroom hiding behind clothes and another was hiding in a bathroom. A cat carried out by one firefighter looked less than thrilled.
Posted by arbroath at 6:07 am
Email ThisBlogThis!Share to TwitterShare to Facebook