Working dogs have always been a revered part of life in rural Australia. Australia's 'winery dogs' have several volumes of books documenting their role in the vineyards. But to date, little has been said for the apiary dog. More than likely, that's because dogs can't get near a hive of bees without being aggressively chased away. 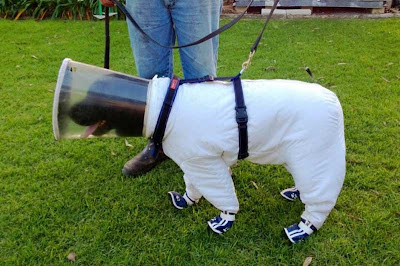 This was the problem beekeeper Josh Kennett encountered when he began training a black Labrador named Bazz to sniff out the nasty bee disease American foulbrood. The beekeeper, from Tintinara in South Australia's south-east, says that while there are dogs doing similar work in the United States, the cold temperatures there negate the need for protection. "Their winters are far colder than ours, with snow over the top of beehives. We don't have that situation here in South Australia.

"So I've tried to develop a suit the dog can wear and hopefully avoid being stung." Mr Kennett says after a long process of trial and error, he's finally got a working prototype. The process of training his dog and developing the suit has been an attempt to find a better way of controlling American foulbrood. The disease devastates beehives, and to date there's no cure for it, so good control and quarantine are essential in apiaries across Australia. 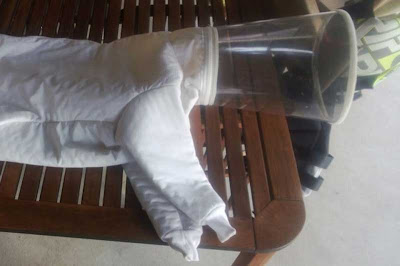 After a lengthy training regime, and with a suit ready to go, Mr Kennett's dog is ready for action. "We've now proven the concept, he can find the infected hives. The only challenge now is getting the dog comfortable with the suit. It's hard to change a dog's habits overnight. To fully cover a dog up and expect it to do the same thing, it takes time to change how he behaves and to get used to that suit."

There's an audio interview with Mr Kennett here.
Posted by arbroath at 6:07 am
Email ThisBlogThis!Share to TwitterShare to Facebook