A sculpture in the central Swedish town of Örebro has hit a nerve with some local residents, who are unimpressed with the eight-metre tall man boy urinating in their river. Each summer Örebro becomes a canvas for international artists to present their work as part of the Örebro Open Art exhibition. This year, one particular sculpture has caused quite a stir since its installation on the banks of the River Svartån. 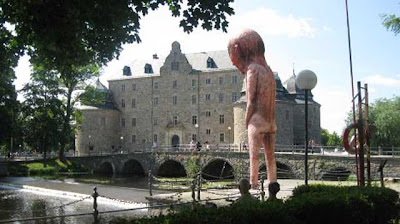 The piece is an eight-metre high sculpture of a nude male figure urinating into the river. The statue, named "Bad Bad Boy", is a far cry, however, from its chubby angelic counterpart Manneken Pis who famously spends his days peeing into a Brussels fountain. "Bad Bad Boy" by Finnish artist Tommi Toija stands towering over the river bank with his disproportionate body: lanky and topped with an over-sized, round, bald head.

The installation has prompted discussion between locals and opinion is certainly divided. One Örebro resident, 62-year-old Ebba, was mildly amused. "I think it's interesting," she said. "But I am happy it is not here forever." Another local, 34-year-old Anna, said she "really hates" the artwork and found the act of urination "provocative". 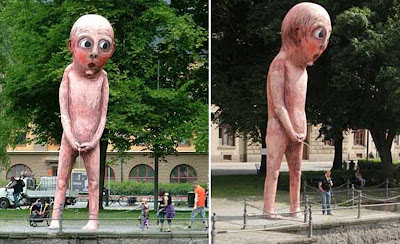 Artist Tommi Toijas views his work in a somewhat pragmatic light: "For me, it's just a guy peeing in the river, no more, no less. Some might see it as a funny thing, others might be provoked," he said. "Bad Bad Boy" will continue relieving himself until the end of the exhibition on September 1st, whether the locals like it or not.
Posted by arbroath at 6:02 am
Email ThisBlogThis!Share to TwitterShare to Facebook

that is just scary and ugly