Porcupine on the run in Birmingham recaptured after injuring dog

An escaped porcupine has been recaptured after injuring a dog in Birmingham. The spiky pet, an African porcupine, had been missing from its Kings Heath home for two days. A man and his bull terrier found the spiky rodent in woodland off Broad Lane in Kings Heath at the weekend. 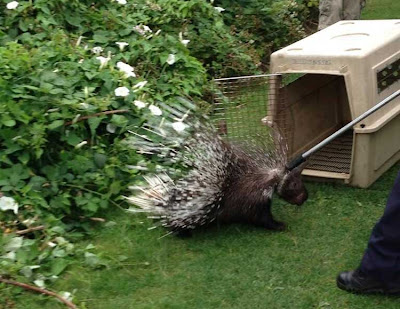 The dog received treatment for minor puncture wounds, before both animals were given a clean bill of health and returned to their owners. Local resident Sally Hookes photographed the porcupine's rescue by the RSPCA on Saturday.

It is understood the porcupine owner, who runs an exotic animal education business from her Kings Heath home, had reported the animal missing to the RSPCA on Saturday morning and put up 'lost porcupine' posters. 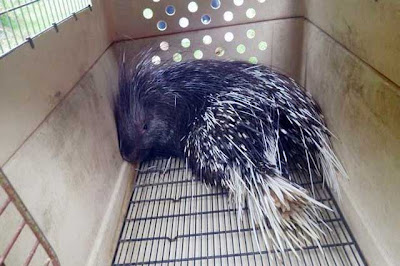 The escapee was checked over by RSPCA officers and looked after at West Midlands Safari Park. Bob Lawrence, from the safari park, said it had a minor wound that needed treatment with an antiseptic spray. The RSPCA checked the repaired enclosure was suitable for the porcupine before it was allowed to return to Kings Heath.
Posted by arbroath at 6:00 am
Email ThisBlogThis!Share to TwitterShare to Facebook