Britain’s biggest ever ‘fatberg’ has been removed from a London sewer. The bus-sized lump of wrongly-flushed festering food fat mixed with wet wipes formed in drains under London Road in Kingston, Surrey. Had it not been removed it could have led to sewage flooding many homes, streets and businesses in the leafy London suburb. 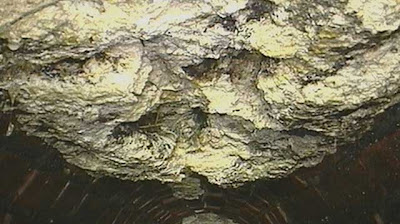 Gordon Hailwood, waste contracts supervisor for Thames Water said: "While we've removed greater volumes of fat from under central London in the past, we've never seen a single, congealed lump of lard this big clogging our sewers before. Given we’ve got the biggest sewers and this is the biggest fatberg we’ve encountered, we reckon it has to be the biggest such berg in British history.

“The sewer was almost completely clogged with over 15 tonnes of fat. If we hadn’t discovered it in time, raw sewage could have started spurting out of manholes across the whole of Kingston. It was so big it damaged the sewer and repairs will take up to six weeks. Homes and businesses need to change their ways, when it comes to fat and wipes, please remember: ‘Bin it – don’t block it.’”

The blockage was discovered after residents in nearby flats complained that they couldn’t flush their toilets. CCTV investigations in London Road found the mound of fat had reduced the 70x48cm sewer to just five per cent of its normal capacity.
Posted by arbroath at 6:00 am
Email ThisBlogThis!Share to TwitterShare to Facebook

Honestly, that is just gross. So glad that isn't my job.

Does the sewer come from Westminster?