When Southeast Portland lawyer Charley Gee picked up flowers for his wife while grocery shopping in February 2012, he chose "Love Story Lily." The flower was packaged with a warning about not being for human consumption and about the risk of staining clothing, but there was nothing about potential harm to cats, he said. In the next 24 hours, Gee and his wife, Kara Bredahl, would rush their 8-year-old cat, Boogaloo, to DoveLewis Emergency Animal Hospital. 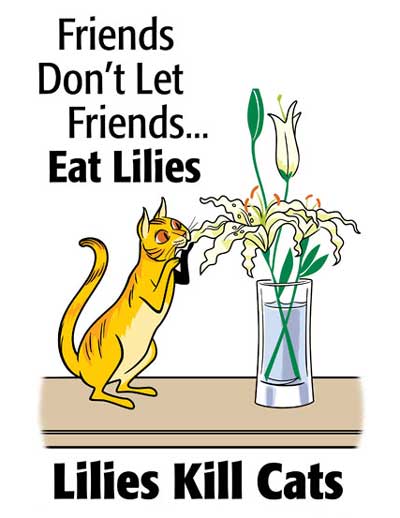 There, doctors flushed the cat's kidneys, put him on kitty dialysis and kept him for four days after the cat chewed on the leaves of the lily - which is highly toxic to cats. Now, Gee is suing New Seasons and its floral supplier, Bay City Flower Co. from Half Moon Bay, California, alleging product liability and negligence because they failed to label the flower with a cat-specific warning. The lily was "unreasonably dangerous," according to the complaint, filed last week in Multnomah County Circuit Court.

Gee argues that the responsibility lies entirely on the retailer and wholesaler to disclose the risk - not on cat owners to know it themselves. "When you have a consequence as high as that, it's up to the retailer or a manufacturer - who are making money off this product - to warn of these potential high consequences of buying the product," he said. His animal-law attorney, Dane Johnson, cited floral industry papers alerting retailers to the risk lilies pose to cats. In addition, Johnson noted that the companies did label the flower with the not-for-human-consumption warning and the staining alert. 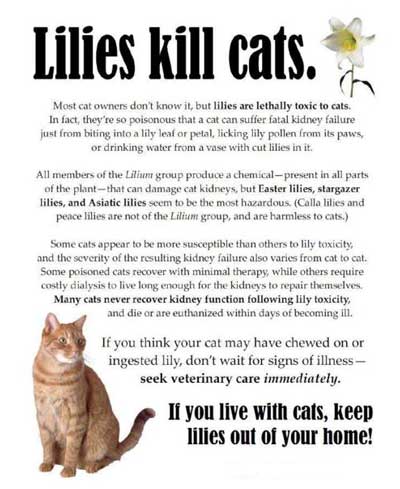 Those warnings could actually lull buyers into a "false sense of security," Johnson said. The buyer would not realize there are other hazards. In addition to seeking $1,542.47 in veterinary bills, Gee wants Bay City and New Seasons to specifically label lilies as highly toxic to cats. He said he filed the lawsuit after both companies declined to pay the vet bills and add labelling. Boogaloo has made a full recovery, Gee said. His flower shopping, however, has not. Now, if he buys flowers, he doesn't bring them home, he said. They go directly to his wife's office.
Posted by arbroath at 6:07 am
Email ThisBlogThis!Share to TwitterShare to Facebook

Americans will sue over anything.

Negligent pet owner suing someone else for his own negligence. Go figure.

He should sue McDonald's for serving hot coffee that is hot. Oh wait, that's been done...

As a pet owner, it is my responsibility to find out what is & isn't safe for my pets. As soon as you get a pet the onus is on you to find out as much as possible about the care and safety of whatever type of animal it is. The man is a twit!

Incorrect, Piers: American TRIAL LAWYERS will sue over anything. The rest of us hard-working Americans would like to see all the trial lawyers at the bottom of a well -- with two broken legs, preferably.

he is not negligent, and to say so is wrong. they make money from a product, they are responsible for properly labelling their product. I have had many cats and I never new this about Lillies. I hope he wins.

Aww, my little house panther is named Lily because I'd brought a handful of Stargazer lilies home a few minutes before I brought her in the house.

She's quite sweet and dainty, but one helluva mouser. And an eater of lil Texas wild scorpions, too.

I had a similar incident and plan to take legal action. The day after I was released from the hospital for major surgery (which left me disabled for next month and only able to do limited walking using walker and someone's help.) I was sent flowers that had poisonous lilies. My cat got into them. We are awaiting to see if he will live and the vet bill is expected ~$3K. How is someone disabled to be able to assess flowers that were sent to her home and not even near her? The florist was irresponsible in sending poisonous flowers to someone's home. They know they are toxic so should never include them unless they are specifically asked to do so.