Two pet ferrets are lucky to be alive after they were trapped by the incoming tide at a Northumberland beach. The female ferrets, Lucky and Tootsie, were minutes from being sent to a watery grave when they were plucked from the sea in Cambois Bay. They were rescued from their hideout, in a rocky offshore hole, by Newbiggin-by-the-Sea lifeboat volunteer Mark Callan as the rising tide threatened to engulf them. He was part of the RNLI crew sent to the scene after the animals’ desperate owners raised the alarm by calling the Coastguard. 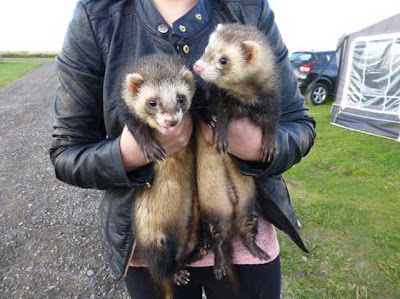 The RNLI have said the incident is believed to be the first time a lifeboat crew has ever been called out to rescue ferrets. Lucky and Tootsie had been taken to the seafront by a woman and two teenagers, who were believed to be staying at a caravan park near Newbiggin. It is not clear whether they were being exercised, or had somehow got out of the cage they were kept in, when they ran off and disappeared into the rocks. One of the teenagers stripped off and waded into the sea up to his waist, but was unable to coax the two ferrets out with the offer of food.

With the tide coming in quickly the trio eventually decided to call 999, and the coastguard alerted the Newbiggin lifeboat which was out at sea on a training exercise at the time. Crew members Mark Callan and Peter Leslie waded to the shore, and located the ferrets in a hole next to a ledge in the rocks. Mark was able to pluck one of them to safety, and the other then followed before the pair were reunited with their grateful owners. Newbiggin lifeboat press officer, Richard Martin, said: “We always turn out, no matter what sort of rescue comes along, whether human or animal. However, this was certainly an unusual one. 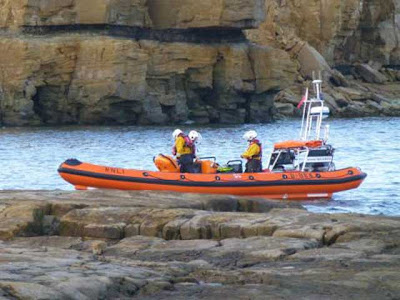 “We have rescued dogs before, but never ferrets. These ferrets got into a hole in the rocks, which is their natural terrain. The tide was coming in rapidly and in another 15 to 20 minutes they would have drowned. One of the owners went into the sea trying to coax them out, but he was shouting so much that they were nervous and wouldn’t budge. When we got them out the ferrets were oblivious to the drama, and just happy to get some food.” Pauline Cooksey, Newbiggin lifeboat operations manager, said: “This is definitely a first in Newbiggin’s 162-year history, and probably the first ferret rescue in lifeboat history.”
Posted by arbroath at 6:00 am
Email ThisBlogThis!Share to TwitterShare to Facebook

Those are the BIGGEST ferrets I've ever seen. They're practically raccoon-sized. I guess ferrets come in different breeds.

Unless she's a tiny, wee woman.