A woman secretly filmed dancing at a bus stop landed a role in a professional stage show. 35-year-old Ellie Cole from Southampton was invited to take part in the performance of play Ah Men at The Point Theatre in Eastleigh on Saturday after the writer saw her bus stop-dancing video by chance. Ellie studied performing arts for a year at Eastleigh College, but had to drop out after she lost her job and could not afford it. 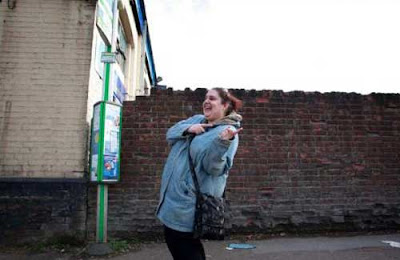 She said this was a chance to fulfil her stage ambitions. “It’s very flattering and humbling,” said Ellie, who attended rehearsals in London last week. Lynne Paris, writer and director of the show, said she always looked to try and include local performers and by chance came across Ellie’s online boogie a few weeks before.

“My son saw the video and he said ‘you’ve got to see this mum, she’s just like you’. Wherever I am, if there’s music I find myself jigging along to it. I think anybody who likes music could identify with it.” When she realised Ellie was from Eastleigh, she tracked her down.

Lynne’s play Ah Men is based on her own experiences after learning that her husband – a public servant working in Hampshire – wanted to become a woman. Ellie, who lives in St Mary’s and works for MTS Cleansing Services in Eastleigh, featured in the chorus line in the first act, a club scene and performed in a group singing and dancing number. Ellie said: “I’m just a normal everyday person who happened to like dancing at bus stops. Still to this day I find it hard to believe this has all happened. It’s like ‘wow, why me?’.”

Previously And.
Posted by arbroath at 6:01 am
Email ThisBlogThis!Share to TwitterShare to Facebook

Hey, I wish her well.