A mayoral candidate has created a campaign video in which he emerges from a lake while sipping from a coffee mug. 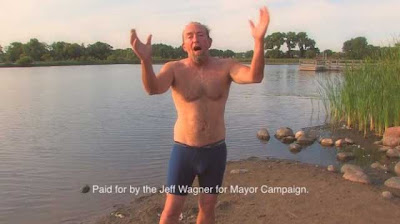 Jeffrey Wagner, who is running for mayor of Minneapolis, pledges not to frequent strip clubs. He also tells would-be voters to "wake the f*ck up."

A woman then replenishes his coffee mug and Wagner turns and walks back into the lake.

Wagner is up against more than other 30 candidates running for the mayoral election on November 5th.
Posted by arbroath at 6:06 am
Email ThisBlogThis!Share to TwitterShare to Facebook