Mauricio Sainz, co-driver for Sebastian Llamosas, did what he had to do to help them reach the end of a rally stage when their car suffered a mechanical failure. 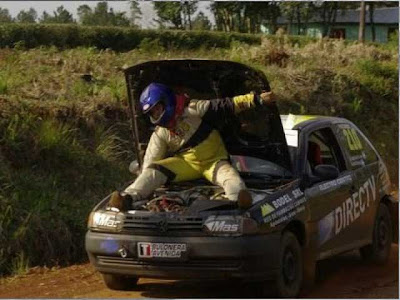 Towards the end of the stage, which took place on Sunday in Campo Viera, Misiones, Argentina, he climbed on top of the engine under the opened bonnet to accelerate by hand after the throttle cable snapped, reaching speeds of 100 kilometres an hour.

They sped along for 800 metres, to reach the end of the stage and the service park.

Ignacio Allende, president of the Association of the Misiones Rally, said: "Dangerous is without question," adding that it is the first time something like this had happened in the rally, where the navigator did whatever it takes to reach the end.
Posted by arbroath at 6:08 am
Email ThisBlogThis!Share to TwitterShare to Facebook