Stork detained in Egypt on suspicion of spying

A stork has been detained by police in Egypt on suspicion of spying. The bird was put behind bars after a man fishing in the Nile in Qena, some 280 miles south-east of Cairo, spotted an electronic device attached to its feathers. 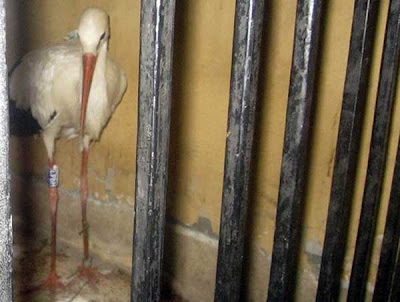 Thinking it was an undercover agent, he captured the stork and took it to a police station near his home, said Mohammed Kamal, head of security in the Qena region. Puzzled officers examined the bird, fearing the gadget was a bomb or spying equipment, and then called in veterinary experts.

Eventually, they discovered it was a wildlife tracker used by French scientists to follow the movement of migratory birds, said Ayman Abdallah, head of veterinary services in Qena. He said the device stopped working when the bird crossed the French border, absolving it of being a spy. 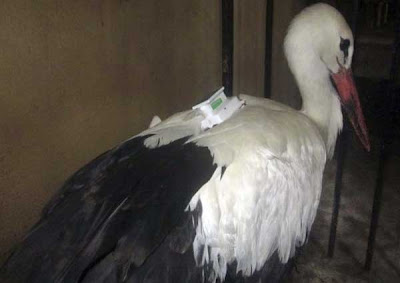 But he said it would have to remain in police custody for the time being because officials need permission from state prosecutors to release the bird. Commentators said that with turmoil gripping Egypt following the military coup that overthrew President Mohammad Morsi, authorities and citizens remain on high alert.
Posted by arbroath at 6:06 am
Email ThisBlogThis!Share to TwitterShare to Facebook

I believe a smaller bird was captured in turkey last year and same story there, somehow they think birds are used for spying.

Anyone with conspiracy links regarding dark forces using birds as spies?

That's where the "a little bird told me" come from

but seriouly it's even in the bible
Ecclesiastes 10:20 "Do not revile the king even in your thoughts, or curse the rich in your bedroom, because a bird in the sky may carry your words, and a bird on the wing may report what you say."

Well the bible is enough of conspiracy for me