A Chinese woman, surnamed Liu, in Shuangcheng, Heilongjiang Province needed hospital treatment after being bitten on the hand by a snake that jumped out of a bottle of wine.

Ms Liu bought a live snake and preserved it in wine to cure her rheumatism. However the snake was still alive after spending three months in an alcohol filled bottle. 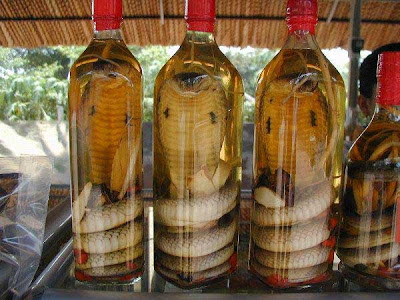 Alcohols containing preserved snakes boasting medicinal properties are common in China. When Ms Liu opened the bottle to add more spirits, the snake attacked her. She received treatment for inflammation.

A similar case involving a serpent resurrection occurred in 2009 when a Hubei Province resident surnamed Zhang was bit two months after he attempted a similar brew. Zhang was not severely injured, unlike a villager from Guangxi Zhuang Autonomous Region in April 2001 who died a day after being bitten from a preserved wine snake.
Posted by arbroath at 6:06 am
Email ThisBlogThis!Share to TwitterShare to Facebook

How cruel - aren't there any laws for treatment of animals in China?

Anonymous, the Chinese are responsible for cutting fins of sharks, killing tigers, cutting off rhinocerus horns, etc, all in the name of medicine.

So snakes can survive for 3 months without oxygen? I call bullshit