A Fort Worth woman called police for help when two goats appeared out of nowhere and wandered into her backyard. "Are you needing police, fire or ambulance?" the 911 operator asked. "No, this is goats," answered Sharon Dyer. "Two billy goats in my backyard." 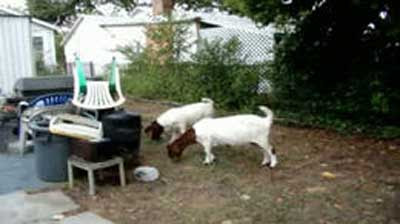 She first noticed the animals when she was in her living room watching television. "Out of the corner of my eye, I see two billy goats," she said. She walked outside to investigate. "I went and looked; looked down thataway, looked down thisaway," she said. The animals had sneaked into her backyard.

Phone in one hand, video camera in the other, she ended up calling 911. "Ya'll get," she yelled at the animals. "Don't come over here to my garden." Sure enough, they destroyed a few of her jalapeno plants. But Dyer was especially protective of a tiny palm tree that she had brought back from a recent trip to Florida. "And then a goat is going to eat it? Not on my watch!" she said.

Dyer grabbed a small table to protect the palm tree, which is in a bucket and just a few inches tall. Several police officers arrived. The goats' owner, who lives just around the corner, showed up about the same time. He said they were his pets, named Savannah and Willie. He apologised, promised to replace the destroyed plants and took them back home. "I videoed 'em all the way down the sidewalk," Dyer said. "They didn't want to go, either."
Posted by arbroath at 6:09 am
Email ThisBlogThis!Share to TwitterShare to Facebook

Gonna have a us mongolian BBQ, baby!