Firefighters failed to battle blaze in own building

A team of German volunteer fire fighters were forced to look on helplessly as their fire station burned to the ground over the weekend. 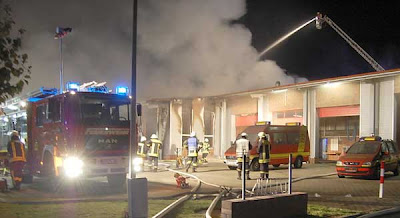 A volunteer fire station in the Scharrel district of Saterland, North Rhine-Westphalia burned to the ground early on Saturday morning, as firefighters arrived on the scene too late to save it.

A neighbour alerted the emergency services after spotting the flames just after 2.40am. But by the time the volunteer fire fighters arrived at their station, which was just five years old, the blaze had already consumed the building, making it impossible for them to enter. 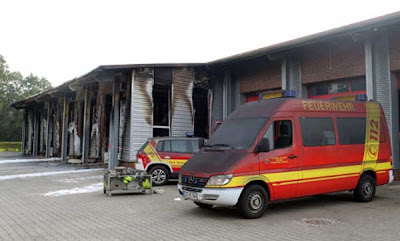 Despite their best attempts to control the flames from outside, the 70 volunteers were forced to watch on helpless as the entire building was destroyed. Nobody was hurt in the incident, which is thought to have caused around five million euros in damage. Along with the building, the fire destroyed a boat and six fire engines.
Posted by arbroath at 6:02 am
Email ThisBlogThis!Share to TwitterShare to Facebook

Good grief! I think I've only seen this scenario in a Donald Duck cartoon (or maybe heard it on a Disney 45 RPM record, about Donald Duck's firehouse?).

There must be a word for obvious irony rubbed into peoples' faces.