A species of sea slug from the Great Barrier Reef stabs its mating partner between the eyes with a sex drug that makes them more willing, scientists have revealed.

An "exceptional traumatic mating behaviour" never documented before in animals, the injections are thought to contain a potent mixture chemicals that manipulate the victim for reproductive ends. Given sea slugs are hermaphrodites, both partners will attempt to penetrate the other's head using a needle-like organ or stylet, common in most slug varieties.

While the purpose of the sex drug remains unknown, the research team did offer some hypotheses. The drug may prevent the recipient from digesting "the donor's sperm and instead use it to fertilise the current egg batch", research leader Rolanda Lange, of the University of Tuebingen, Germany, said.

Another possibility is that the injection's side effects counter the slugs' promiscuity, buying invaluable postcoital time before moving on to their next mate. The team observed similar behaviour in other sea slugs from the same genus (Siphopteron), but found they stabbed much more haphazardly over the body. They suspect the head-injecting slug is the only variety to target the central nervous system that lies behind the forehead.

Or, as The Guardian reports. 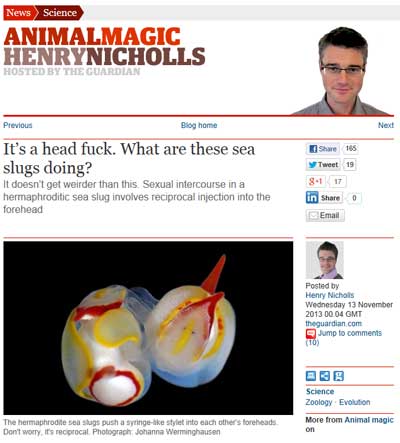 Posted by arbroath at 6:02 am
Email ThisBlogThis!Share to TwitterShare to Facebook