Police dog bit his handler during dramatic arrest in the sea

A man was tackled in the surf by police in a dramatic midnight arrest involving jet skis and a helicopter at a beach on Queensland's Gold Coast in Australia. 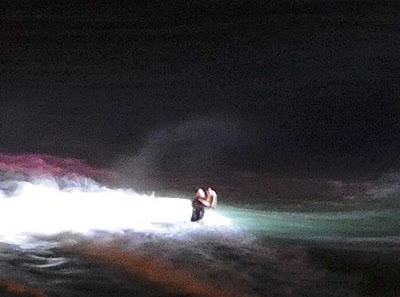 Shane Hookey, 30, who spent an hour and a half pacing in chest deep water to dodge police, was photographed giving officers in a helicopter his middle finger on both hands before being dragged back to the shore by police, where he was crash tackled and taken away in a paddy wagon. 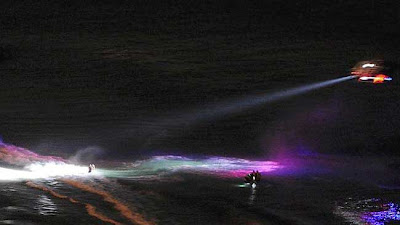 Police responded to a Triple-0 call alerting them to a man who was trying to break into a car on Marina Parade, Coolangatta, at about 9.30pm on Wednesday. When approached by police, Hookey fled and ran into the nearby surf. Police officers gave chase and, with PolAir and police on jet skis, asked Hookey to get out of the water. When he refused, a police dog and handler approached him in the surf.

A police spokeswoman said a "violent struggle" then ensued, in which the animal bit Hookey and dog handler. Hookey was then taken into custody and rushed to Gold Coast University Hospital for treatment for the dog bite. The handler, Simon Buxton, from the Gold Coast Police Dog Squad was taken to Tweed Heads Hospital for treatment for four cuts from bites received during the altercation. Hookey, who sported a bandaged shoulder and swollen face when he later appeared in court was refused bail and will return on December 12.
Posted by arbroath at 6:06 am
Email ThisBlogThis!Share to TwitterShare to Facebook