Woman arrested for Ninja star attack on her younger brother

A knife-wielding woman threw several metal Ninja stars at her younger brother as she chased him down a Florida street late on Wednesday night following a violent confrontation in their home, police allege. 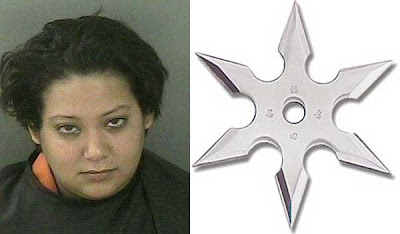 Kimberly Martinez, 25, was jailed on felony aggravated assault charges for allegedly battering her brother Randy, 21. Kimberly and Randy had argued earlier on Wednesday evening about their little sister having a boy over to their home in Fellsmere, a city outside Vero Beach.

Randy “did not like it,” while Kimberly said it was okay, according to an Indian River County Sheriff’s Officer arrest affidavit. The dispute escalated at around midnight, when Kimberly “started to hit and choke Randy” and sought to extinguish a cigarette on his face.

After Randy departed the family’s residence, Kimberly “came outside with a filet Knife” and “started to throw Metal Ninja Stars at him.” Luckily for Randy, his sister’s aim was not true. An officer recovered three Ninja stars, one in the roadway and two near Randy’s girlfriend’s car. Kimberly is being held in lieu of $21,000 bond.
Posted by arbroath at 6:05 am
Email ThisBlogThis!Share to TwitterShare to Facebook